The trial system for IPR-related disputes is a three instance procedure which consists of the Intellectual Property Trial and Appeal Board (IPTAB), the Patent Court and the Supreme Court. The aim of these institutions is to promote and strengthen the protection of IPRs while guaranteeing fair and prompt settlements of IPR-related disputes. More detailed explanations on the IPTAB and the trial system/procedures can be found below:

The IPTAB was established following the merger of the former Trial Board and Appellate Trial Board. In concurrence with the establishment of the Patent Court, the IPTAB commenced its operations on March 1, 1998. The IPTAB is a quasi-judicial body of Korean Intellectual Property Office (KIPO), which serves as the court of first instance for intellectual property-related dispute resolution, and is independently operated within KIPO.

The IPTAB consists of 36 Boards, a trial policy division and a litigation division. Each Board consists of 1 presiding administrative judge and 2 administrative judges, who are in charge of conducting a trial/appeal case. Meanwhile, the trial policy division is responsible for receiving documents, conducting a formality examination, trial quality evaluation, etc., and the litigation division is responsible for litigation proceedings for cases in which the Commissioner of the KIPO is the defendant. 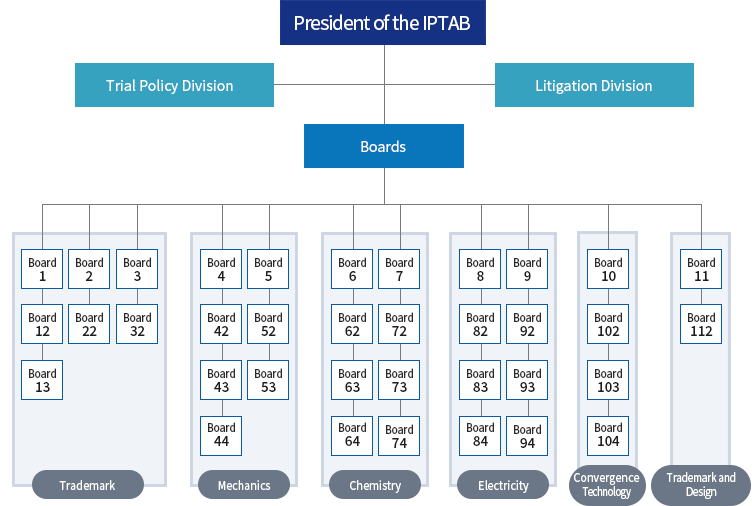 Significance of a Patent Trial and Appeal System

A 'patent trial and appeal' refers to a procedure in which the IPTAB makes an administrative judgment for the settlement of IP-related disputes or dissatisfaction with the rejection of a patent application, etc. In practice, the IPTAB makes first-instance decisions in the three-instance patent litigation system. Only after receiving a decision from the IPTAB can an applicant/agent appeal to the higher courts, that are, the Patent Court and the Supreme Court. 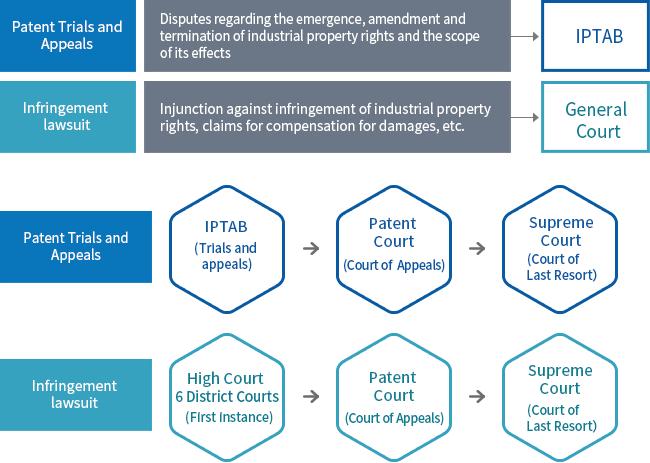 Types of Trials and Appeals

If a person has an objection to an examiner's decision to reject a patent application or to a decision to reject an application to register the extended term of a patent, he/she may file an appeal within 30 days from the date when he/she is served with a certified copy of the examiner's decision. An exception may be applied in cases where a person resides in an area that is remote or difficult to access. In such case, the Commissioner of KIPO may extend the period to 2 months

With respect to a patent application filed on or after July 1, 2009, an applicant may make a request for re-examination or trial, selectively, following a decision of rejection.

A patent holder may request for a trial to correct specifications or drawings in any of the following cases:
- to narrow a claim;
- to correct a clerical error; or
- to clarify an ambiguous description.

However, this shall not apply when a patent opposition is pending with the IPTAB.

Trial for correction is intended to protect a patent invention by providing an opportunity for a patentee to make corrections on the condition that there are not any unexpected losses or damages incurred upon any third parties.

When a trial decision to correct specifications or drawings of a patented invention becomes final and conclusive, it shall be deemed that filing and laying open the relevant patent application, a decision or trial ruling to grant a patent, and the registration of the grant of the patent have been made according to the corrected specification or drawings.

Due to a mistake of an examiner, some patents which should not have been granted may exist. In such cases, an interested party or an examiner may request for a trial to invalidate the defective patent. For a patent containing two or more claims, a request for trial for invalidation may be made for each claim.

Grounds for invalidation are generally the same as the grounds for rejection of a patent application.

An interested party or examiner may request for a trial to invalidate corrections, where the specifications or drawings of a patented invention have been corrected in violation of Article 136.

When a decision to invalidate corrections of specifications or drawings becomes final and conclusive, the correction shall be deemed never to have been made.

In accordance with the Patent Act Article 5, a foreign-domiciled applicant (a person who has neither a domicile nor a place of business in the Republic of Korea), shall not initiate any patent-related procedure, such as application, trial, etc., unless he/she is represented by a patent administrator (an agent with respect to his/her patent, who has a domicile or a place of business in the Republic of Korea). When a request for a trial is made against him/her, there may be problems in receiving the copy of the written request for trial and other documents without a patent administrator, and this often causes difficulties, such as the lapse of a right. 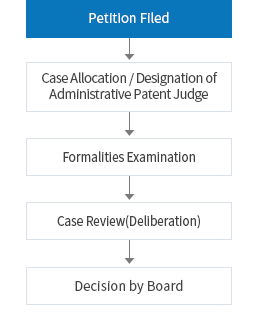 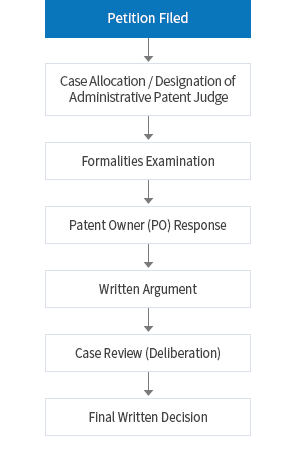 For more information about IPTAB, please refer to the following brochure. Download